Why is Yves Saint Laurent’s “Sardine Dress” So Compelling? 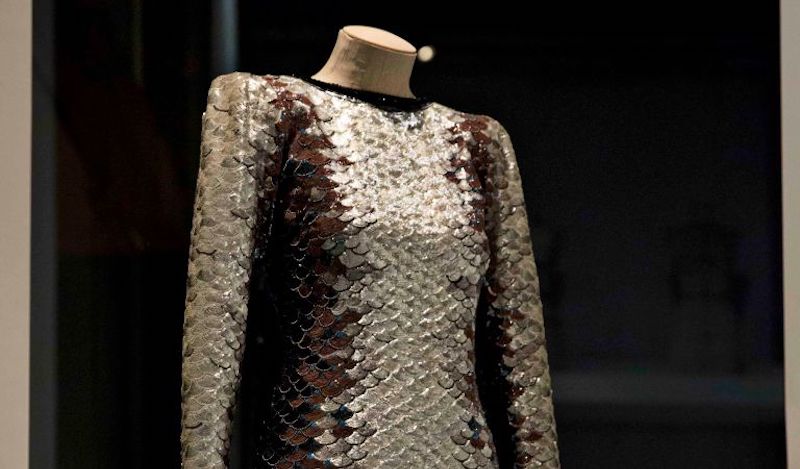 Among dresses adorned with embroidered flowers, botanical illustrations, glass beads, freshwater pearls, chunks of coral, plastic straws, and ostrich feathers, one stands out for me, a dress made to look like fish skin. This is the dress I have come to see, a simple sheath, scoop neck, long sleeves, made to hug the contours of the body so that a woman might look as sleek and bioluminescent as a fish. Made from black silk crepe, its surface is covered with an imbrication of black and pewter beads, the fish scale motif created with blue, gray, black, brown, silver, and opalescent gelatin sequins. The colors are so subtle that they bleed into one shimmer like the disappearing light a herring casts as it darts through the water. Each scale on the dress is made of five or six rows of overlapping sequins, the tiny sequins in each cluster adding up to a composite scale that has been scaled up from tiny scales shingled over each other with invisible stitches. The dress is all about scale: how micro detail can be patterned into a state of macro elegance and beauty.

When I was a child first visiting Grand Manan Island in the Bay of Fundy, I saw the herring seiners pump torrents of silvery fish through a scaler on their way to the sardine factory. The scales were siphoned off in baskets made of ash wood, the slimy glitter carried to Mearl Pearl in Eastport, Maine. The company turned the scales into cosmetics, nail polish, and automotive paint. The Mearl Corporation ran the last commercial “natural pearl essence” plant in the world. It closed in 2007.

Now the sheen in such products comes from mica or plastic. The few boats that continue to harvest herring from weirs or purse seines in the Bay of Fundy, where the herring fishery has tanked in the past decade, dump the scales back into the sea as waste. Fish scales must have been the original inspiration for sequins. That long human hunger to possess the grace in form and movement of animals finds many vocabularies in fashion. Fur coats, alligator shoes, leather pants, feather boas. Silk made from the saliva of worms. The first sequins were made of gold—glam in the Indus Valley five thousand years ago.

The sardine dress is a 1983 design of Yves Saint Laurent. The sequin work hand-stitched at Maison Lesage in Paris took 1,500 hours to complete. The dress makes some improvements on nature by adorning the female form in a second skin that projects the graceful and fluid movement of a schooling fish. Perhaps it appeals to a deeply buried atavistic call in us to return to the waters of our ontological past. The dress must have been heavy to wear, but the exhibition manikin does not have to worry. She is headless, handless, legless. She stands on a wheeled base with illuminated details of the sequin work projected onto the walls. The dress catches the light with such intensity that the delicate paillettes perfect the illusion: the dress is made of metal, a gorgeous feminine armor. Metal dress on the wheeled metal shaft of the manikin stand, though of course the dress is not metal at all, merely the illusion of metal, ideal for the woman who shines with the patina of strength. The hem and sleeves are trimmed with a different pattern of sequins. Long ripples rise and fall, rise and fall, like a disturbance on a calm bay, moon-work at play in a field of light. The manikin is standing in an arched alcove that mirrors water’s restlessness in shimmering light, though there is no water in the exhibit hall.

My grandmother kept a dress-form manikin in her room. She lived with us throughout my childhood, retired from her business as a dressmaker in New York City. She continued to make her own clothes, an elegant black dress with overlays of lace and insets of moiré silk, a flared floor-length dressing gown in sateen in a print featuring oversized begonias. Her manikin stood on a small table, its torso covered with beige canvas and padding to represent precisely my grandmother’s form with its impressive bosom and stout trunk. She never used a pattern, but cut the fabric by eye, laid it on the manikin, stitched by hand the toile that would guide her hand when she sat to work on the treadle-powered Singer to make the finished garment.

Marie Bregny had learned the skills from her mother Louisa, my great-grandmother, who emigrated from Paris to New York City in the 1860s and established the dress-making business that carried the family for two generations under the hands of these women. It ran from the 1870s until sometime in the late 1920s, by which time the ready-to-wear industry had driven such small-scale artistry into obsolescence. At its peak, the business employed 16 women, many with refined skills—a Hungarian woman who specialized in beadwork and sequins, sleevers, finishers—and it served a wealthy clientele who ordered dresses for each season, custom-made dresses in the current Paris styles fitted precisely to the customer’s body.

I have been looking for these two women both long dead. I find myself thinking of them at incongruous moments. A friend describes her mother’s unhappiness. Her husband wouldn’t let her get a job. “Oh, back then women couldn’t . . .” I want to argue that there have always been women who defied the odds, but I don’t. My argument is not with anyone who acknowledges the limits imposed on women’s lives. My argument is with the world’s dismissal of makers in favor of manufacturers. My argument is against breakers, who seem everywhere to be rising in influence.

A fisherman sits mending his nets before heading out to seine his weir for herring. He passes the shuttle through the grids of twine, knotting each of the four corners of every half-inch square for adding strength. His hands are strong and sure. “How did you learn that?” a younger fisherman asks him, looking on with keen attention. The older man names the one who taught him. It was a family thing, three generations of men, each making the skill he’d mastered look easy to the one coming up. Makers. Whose skill is so perfectly fit to the needs of the job, learned by watching and doing, patience and time.

The sardine dress was made with machine-stitched seams. The sequined embroidery was handmade with stitching techniques mastered in the early 19th century using the Lunéville hook, a tool with a wooden handle and small metal hook, making possible work on very delicate fabrics. From a simple chain stitch, a glossary of stitches developed: in rows, in scales, in a river, vermicelli, garter stitch, Riche stitch, Boulogne stitch, bullion stitch, German knot, triple Palestrina, herringbone, lazy daisy, seed stitch, stem stitch, and many more. Maison Lesage has been the steward of opulent embroidery since 1924, when the house took over the Michonet embroidery atelier that had been in business since 1858. The house currently trains more than four hundred students each year, while riding out boom and bust waves in the fashion industry—the excess of the 1980s and minimalism of the 1990s. Its archives hold the world’s largest collection of embroidery in the world with seventy thousand samples. Its bead library fills a wall where the petite mains, who wear white lab coats and work on commissions for famous ateliers, can select from a color palette to rival Matisse.

The dress makes some improvements on nature by adorning the female form in a second skin that projects the graceful and fluid movement of a schooling fish.

François Lesage, who took over the business from his parents when he was 20 (“I was born into a pile of beads and sequins”), described the process of making couture fashion as an ongoing artistic conversation between designer and embroiderer. I do not know the type of direction that Yves Saint Laurent gave for the sardine dress. The dress was made for the Gilda Collection of spring 1983, inspired by Rita Hayworth’s role as femme fatale in the film Gilda. There is no sardine dress in the film, though there are plenty of sequins. The most celebrated dress in the film is the strapless black satin item Hayworth wore for the “Put the Blame on Mame” number. The dress was a long, side-slit sheath accompanied by shoulder-length black satin gloves, the only thing to come off in a sensual striptease. Hayworth’s moves are astonishing, the liquid swing of her hips, the glorious bare arms extended above her head, the flesh aglow from fingertips to the gently contoured terrain of shoulders and clavicles, the effortless taunting sexuality of a woman who adores her capacity to arouse.

To keep the Gilda dress from falling when she danced, the designer Jean Louis had to build a harness inside the dress. “Like you put on a horse,” he said. “We put grosgrain under the bust with darts and three stays—one in the center, two on the sides. Then we molded plastic softened over a gas flame and shaped around the top of the dress. No matter how she moved, the dress didn’t fall down.” He designed a large faux side-bow at the waist to disguise the belly she had from the recent birth of her daughter. A glorious artifice of femininity and sexual abandon played by a new mother who is harnessed like a horse beneath the sheen of her gown.

I don’t know when the sardines came into play for YSL’s Gilda-inspired dress. “Sardine dress” was not YSL’s name for the dress, though the scales motif is undeniably marine. And Hayworth’s moves are nothing if not piscine. She seems to dissolve into movement, conjuring a being graceful as a deep-water creature yet moving in air. While the Gilda dress is all about creating sexual appeal, the sardine dress is about something different. The neck is high and modest, the sleeves full-length, very little flesh calls out for attention. But the sleek, tight skin of the dress accentuates an appreciation of form, suggests the capacity for gorgeous movement, while the model remains bound. To my eye, the dress celebrates biomorphism and our human relationship to ancient oceanic kin.

Lesage recounts the direction he received from YSL on another creation: “François, make me something that is like a chandelier reflecting off the mirror with the sky of Paris in the background.” Not bad for a man who began as a boy in French Algeria cutting out paper dolls and who ended up one of the world’s great designers, working quietly in the very heart of Paris couture at a desk made of plywood wrapped with muslin and set on sawhorses.

Both Lesage and Laurent are gone, though the work of Maison Lesage goes on under the artistic direction of Hubert Barrère. “Hand embroidery is something emotional,” he said in a 2016 article by Betsy Blodgett in Seamwork. “It isn’t a kind of exhibitionism, and its value doesn’t come simply from the hours and hours of meticulous work involved. Above all else, it’s something that comes from the soul, it makes you feel something, without quite knowing why.”

“Self-adornment goes back to the Lascaux Caves! Think of scarification. That’s the ancestor of embroidery.” 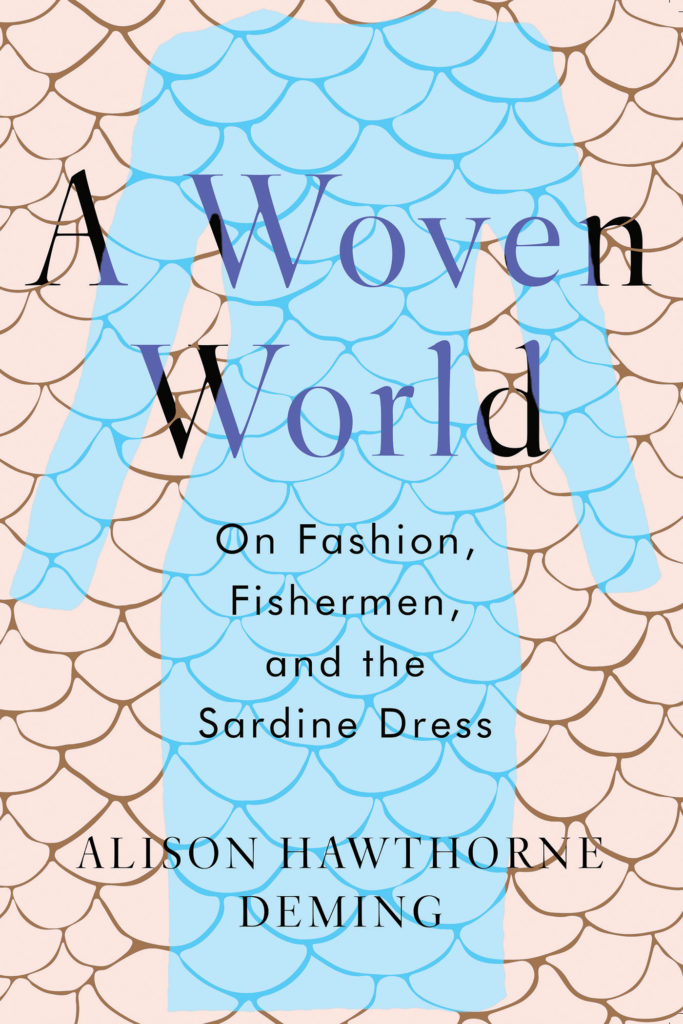 Excerpted from A Woven World: On Fashion, Fishermen, and the Sardine Dress, copyright © 2021 by Alison Hawthorne Deming. Reprinted by permission of Counterpoint Press.