The Bad Guys Ending Explained: Have They Really Gone Straight? 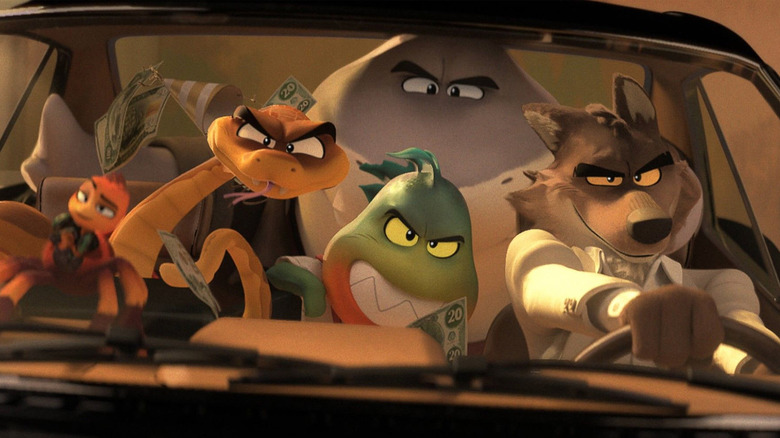 Here comes the fuzz, literally. "The Bad Guys" is a family-friendly heist flick that poses an interesting question -- what if the bad guys try to be good?

Introducing Wolf (Sam Rockwell), a suave and sort-of sophisticated wolf with a penchant for crime. (Think George Clooney's Danny Ocean but a bit furrier.) His crew is notorious, pulling off bank jobs, museum heists, and art thefts that go down in history. But when a high-profile robbery goes wrong, the big bad wolf has a change of heart, and it looks as though this hardened criminal might just change his ways.

Of course, that's not what he tells his crew...

Snake (Marc Maron) is his partner in crime, the Brad Pitt to his George Clooney. Even a hint that Wolf might be giving up the life of crime would push him over the edge. Thankfully, the rest of the crew aren't quite so judgmental. Piranha (Anthony Ramos) is the team's muscle, while Tarantula (Awkwafina) provides tech backup. Rounding out the bad guys is Shark (Craig Robinson) -- a master of disguise who once stole the Mona Lisa while dressed as the Mona Lisa.

Offered a chance at redemption by goodie two shoes Professor Marmalade (Richard Ayoade), an altruistic hamster with a track record for philanthropy, the gang sets off on a road to the good life ... all while plotting the heist of the century.

It's a plan worthy of "Ocean's Eleven" with enough twists and turns to keep you guessing.

But do they really go straight at the end? Here's "The Bad Guys" ending explained.

Who's Afraid Of The Big, Bad Wolf? 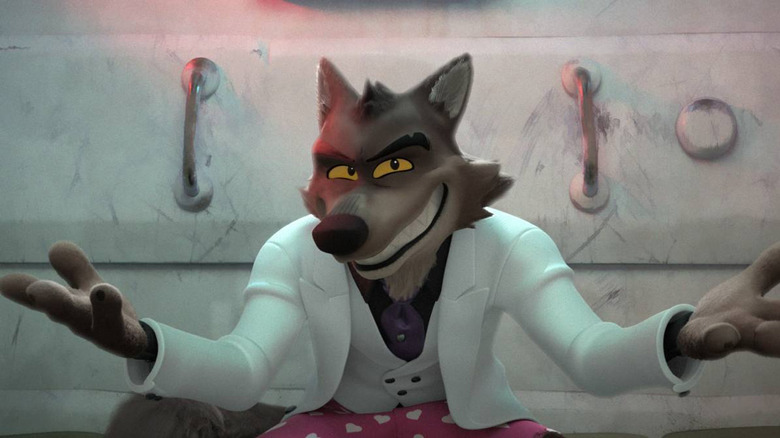 He may be a smooth criminal, but that doesn't mean Wolf is a bad guy ... not really. During the team's latest heist, he gets his first brush with the good life when he spots an old lady in front of him on an escalator. About to snatch her purse, the lady trips and falls, only for Wolf to catch her.

"You're a good boy," she says, patting him on the head.

And that's all it takes to get Wolf's tail wagging -- a sure-fire sign that there's good in him after all. Even if the rest of his team isn't exactly on board. Soon enough, the heist goes sideways, and Wolf, Snake, Tarantula, Piranha, and Shark get thrown in the slammer.

Sure, they could bust out... but where's the fun in that? Wolf has a better idea...

"You villains have an image problem," he says. "You need a makeover!"

His suggestion? The local police release the Bad Guys into his custody to take part in the rehabilitation program of a lifetime -- turning them away from their lives of crime to become a force for good. Thankfully, Governor Foxington (Zazie Beets) is convinced ... and so begins the first day of their best lives.

Of course, Wolf reveals it's all a hustle -- they take part in Marmalade's little experiment just long enough for them to plan the biggest heist of all time.

But it looks as though the Bad Guys aren't the real villains after all... 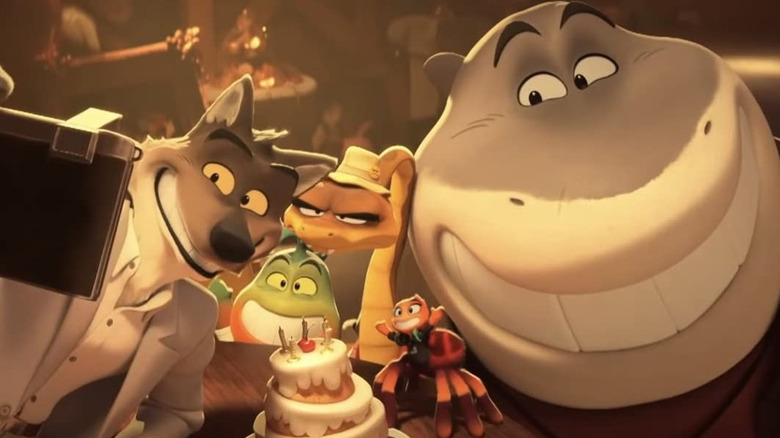 Professor Marmalade's program gets off to a rocky start when the Bad Guys just can't seem to think like ordinary, law-abiding citizens.

"What does your heart tell you to do?" asks Marmalade as he presents the gang with a cat stuck in a tree. "A good person would...?"

It seems that the gang has a long way to go before they start acting like good, moral citizens, but that's kind of the point. They've been the Bad Guys for so long that society tells them they can't be anything else. But Wolf has already had his breakthrough moment, even if the rest of the gang is none the wiser. There's good in him and both the Professor and Governor Foxington see it.

Of course, the gang goes along with the charade, acting good for the cameras while they plot their big heist: stealing the Golden Dolphin Award from the very ceremony where Professor Marmalade will be awarded it for his philanthropy.

But when push comes to shove, Wolf can't go through with it.

It looks as though Professor Marmalade and the promise of the good life have got under Wolf's skin, and he calls off the heist at the very last minute. But wait! A priceless meteorite has gone missing during the ceremony ... and the Bad Guys get blamed for its theft. All that work turning around their rocky public image is for nothing as the gang is arrested live on camera.

And the real bad guy is finally revealed... 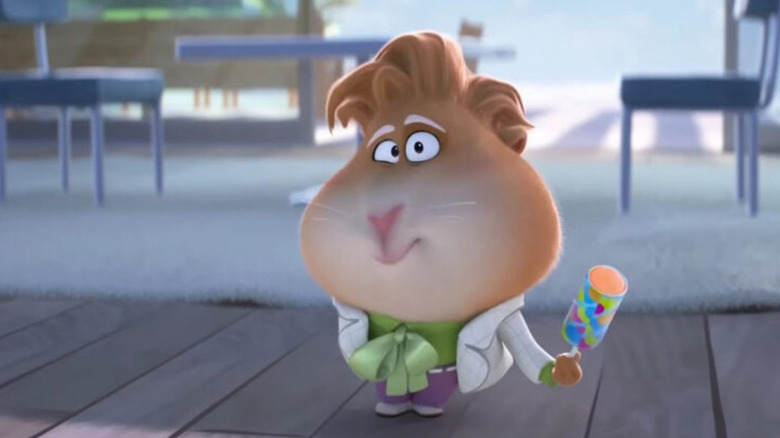 That's right -- it was Professor Marmalade all along! That sneaky hamster has actually been pulling the strings ever since he first crossed paths with Wolf and the gang.

And he reveals himself in the most dramatic way possible: "There, there," he says to Wolf after they're arrested for the theft of the meteorite. "Of course you didn't do it, how could you? After all, you're such a good boy."

It turns out that Marmalade was actually the little old lady Wolf encountered at the start of the film, a hamster in disguise, baiting Wolf to give him a taste of the good life. After all, that would make him far easier to manipulate. It's a classic twist with a reveal that mirrors some of the best heist films on the big screen. But how are the Bad Guys going to get out of this mess? They've been framed by the world's most recognizable Good Guy.

Thankfully, they've got an ally in Governor Foxington ... or should I say, The Crimson Paw!

Yes, it looks as though even the governor has a secret identity, and she was actually one of the world's most accomplished villains until she became a reformed citizen. She makes quick work of breaking the Bad Guys out of prison, but there's a problem -- they turn their backs on poor old Wolf after he admits he wants to go straight.

What's even worse, it looks as though Snake goes running straight to Professor Marmalade...

Here's What Happened Next... 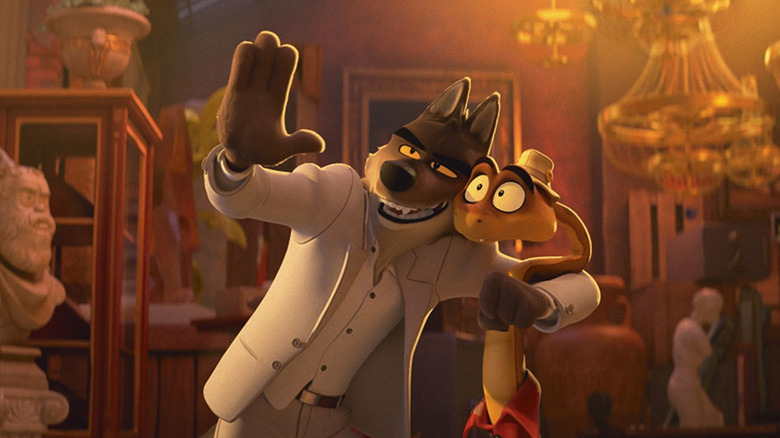 Professor Marmalade's plan is a weird one, so prepare for things to get a bit ... odd.

It turns out that the meteorite holds some kind of strange, otherworldly power to control the minds of those who come into contact with it ... so Professor Marmalade uses it to hypnotize the city's army of guinea pigs to do his bidding. His aim? Use his guinea pig army to raid charity collections across the city and make off with a small fortune.

But he hadn't banked on the Bad Guys actually turning good.

Wolf and Foxington decide to take down Marmalade and break into his mansion to steal the meteorite out from under his furry little nose. But they're captured by Marmalade and Snake in the process. Thankfully, the rest of the Bad Guys turn up just in time, nabbing the meteorite as they plan to turn it in to the authorities. But as they head off without Snake, they have a change of heart and realize Snake can still be redeemed.

I mean, of course, Wolf wasn't going to leave his pal behind.

Thankfully, they catch up with him just in the nick of time as Marmalade betrays Snake, throwing him out of his helicopter. Wolf saves Snake (and the others) with a grappling hook while Marmalade makes his escape ... but the Bad Guys now look like they're the real criminals.

They're soon arrested, and Marmalade arrives to gloat, showcasing the meteorite to his adoring public as proof that he saved the day from those nefarious Bad Guys. But the jig is soon up when Snake reveals he had actually gone good all along and switched the meteorite for a fake when Marmalade wasn't looking. 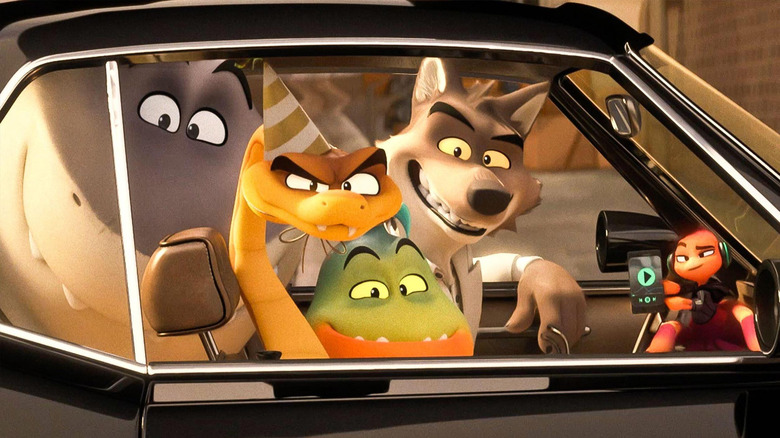 As a gemstone falls out of Marmalade's pocket (planted there earlier by Wolf) it leads the city's police to believe that he was the real Crimson Paw ... and it looks as though the Bad Guys might have saved the day by framing him for Governor Foxington's crimes.

Professor Marmalade has been ruined, his reputation in tatters.

But the public still believes that the Bad Guys are, well ... bad guys. And as the gang goes quietly in the back of a police car, they watch, smugly, as Professor Marmalade is promptly arrested and later sentenced to life in prison.

Thankfully, the Bad Guys now have friends in high places after keeping Governor Foxington's secret, and just a year later, they're let out on good behavior. Teaming up with the real Crimson Paw, they embark on a new life of crime-fighting.

How's that for a happy ending?

"The Bad Guys" may be a family-friendly heist flick, but with plenty of twists and turns, it rivals even some of the best crimes of the century. Packed full of reveals and double-crosses, the ending gets a bit convoluted, in the best possible way. And in the end, the Bad Guys win for once.

Read this next: The 14 Best Animated Movies (That Aren't Made By Disney Or Pixar)

The post The Bad Guys Ending Explained: Have They Really Gone Straight? appeared first on /Film.