by admin August 30, 2021
I can hardly believe it but our little Rhetty Spaghetti is ONE! 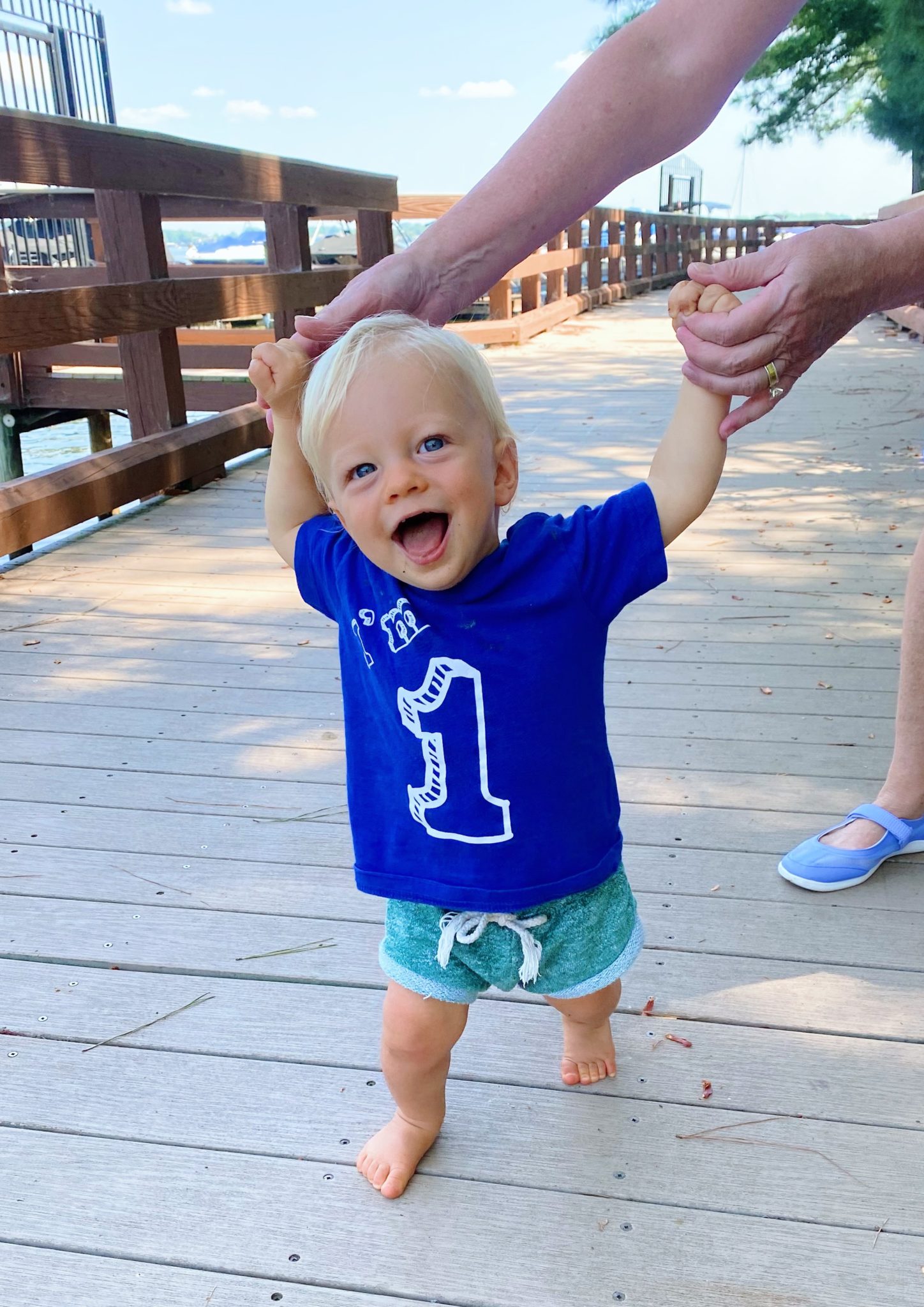 Rhett turning one feels both mind boggling and emotional. I’m always so weird about our kids’ birthdays — especially their FIRST birthday — because even though I know amazing memories are on the horizon, their birthdays also cause me to reflect and seem to emphasize the fact that I won’t ever get to re-live the baby days with my kids again. They’re only little once and that sentiment hits me harder on birthdays than any other day. 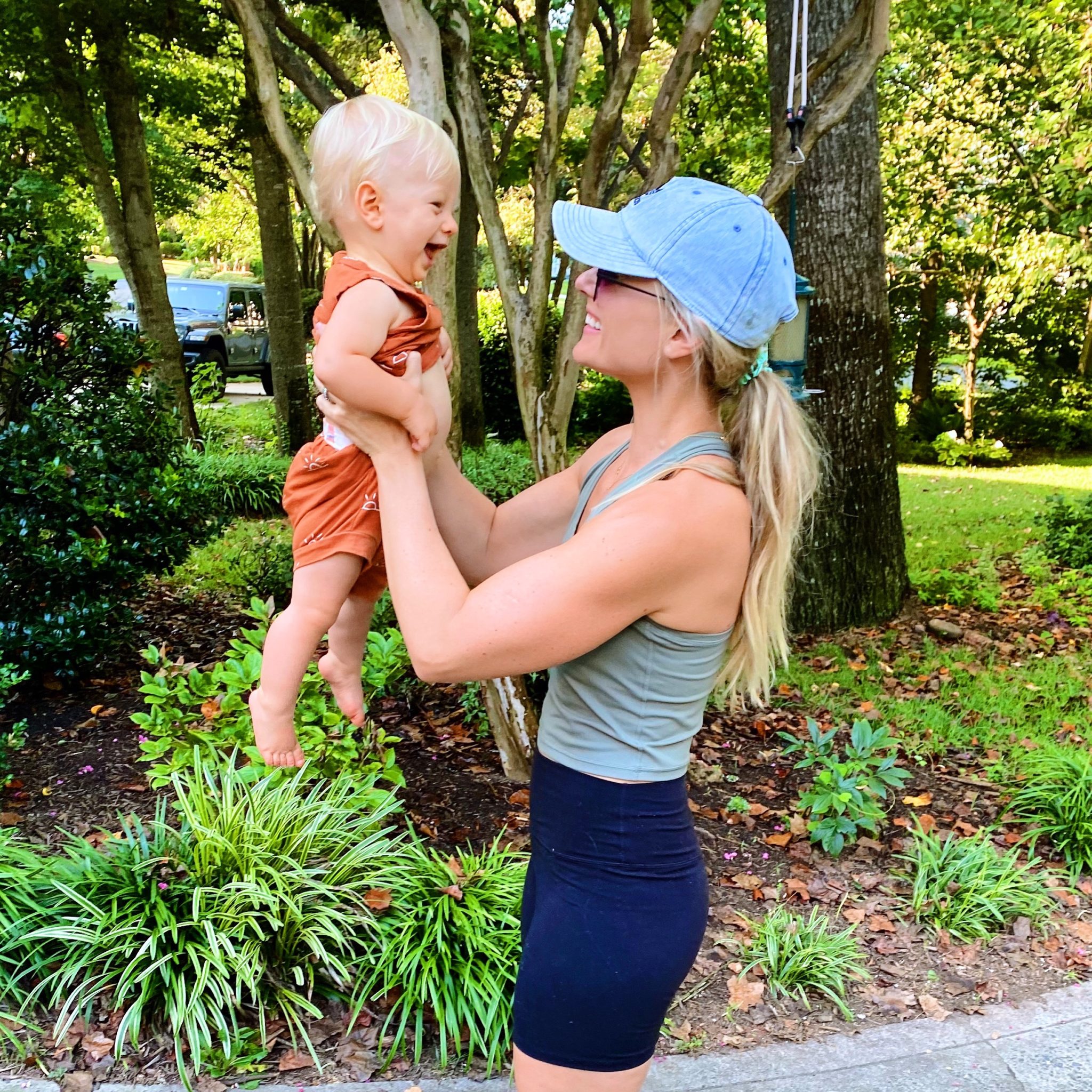 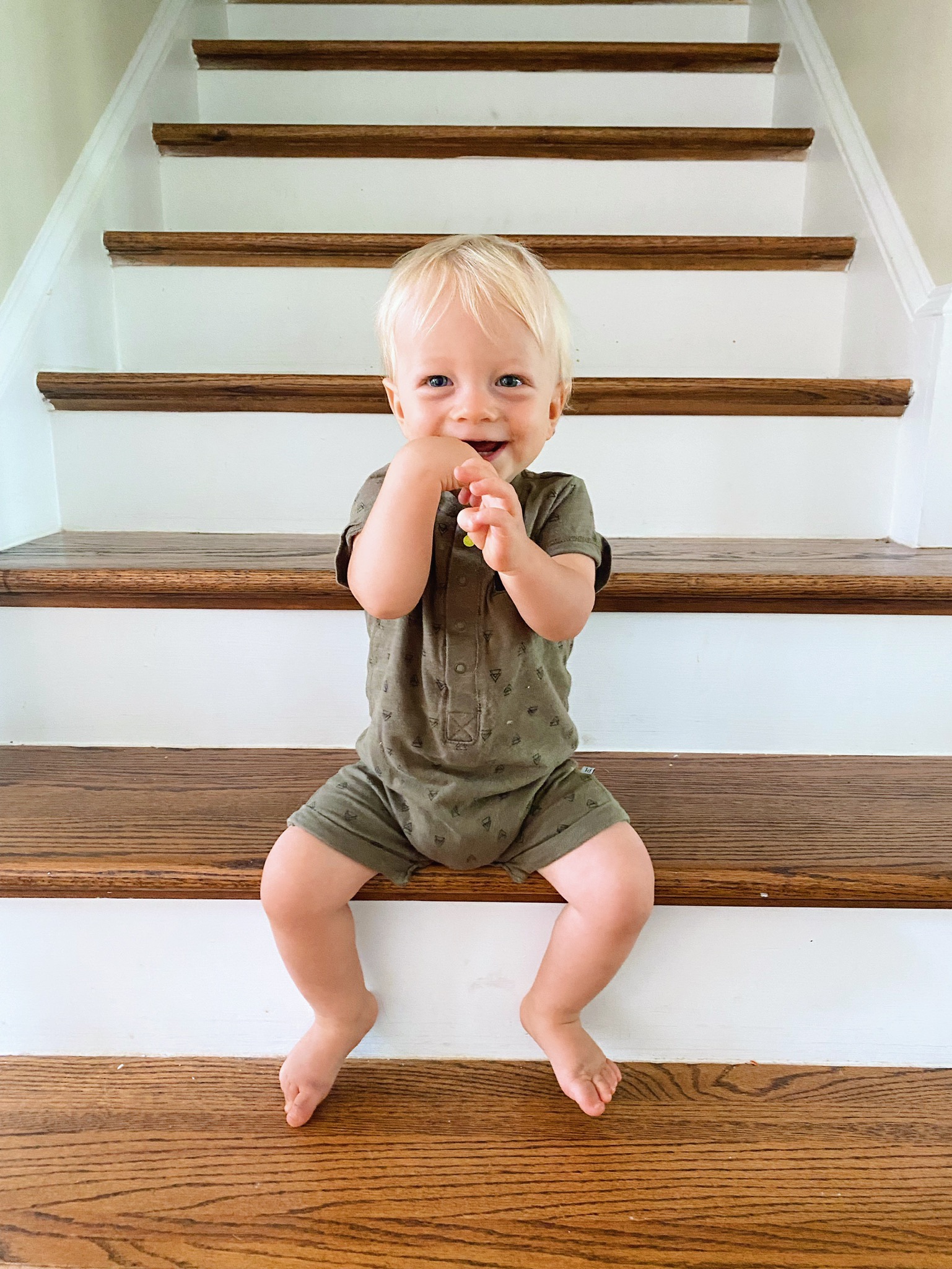 When I think about the past year with Rhett, I remember so many sleepless nights, excessive spit up due to an undetected tongue tie, fussiness we couldn’t decode, refusal to sleep in his car seat during 6+ hour drives to Florida, nursing strikes and numerous other typical baby things that kept this mama of three on her toes. I remember those things but those memories are getting fuzzier. They’re already fading into the back of my mind. In the forefront of my memories are vivid images of Rhett curled up against my belly in our bed as a newborn, asleep while I read my Kindle. His perfect smells-like-home scent. The way he would speed-crawl after Sadie whenever she’d leave the room. The way his little hands pinch my skin and hook my nose as he nurses. His little kicky legs that never stop moving. The way he lights up and his whole body smiles when I greet him after a nap. The way he so clearly watches and imitates his big brothers and wants to be included in every single second of their fun. The giant smile that spreads across his face when he spots me or Ryan from across the room and crawls his little heart out toward us to we can scoop him up. 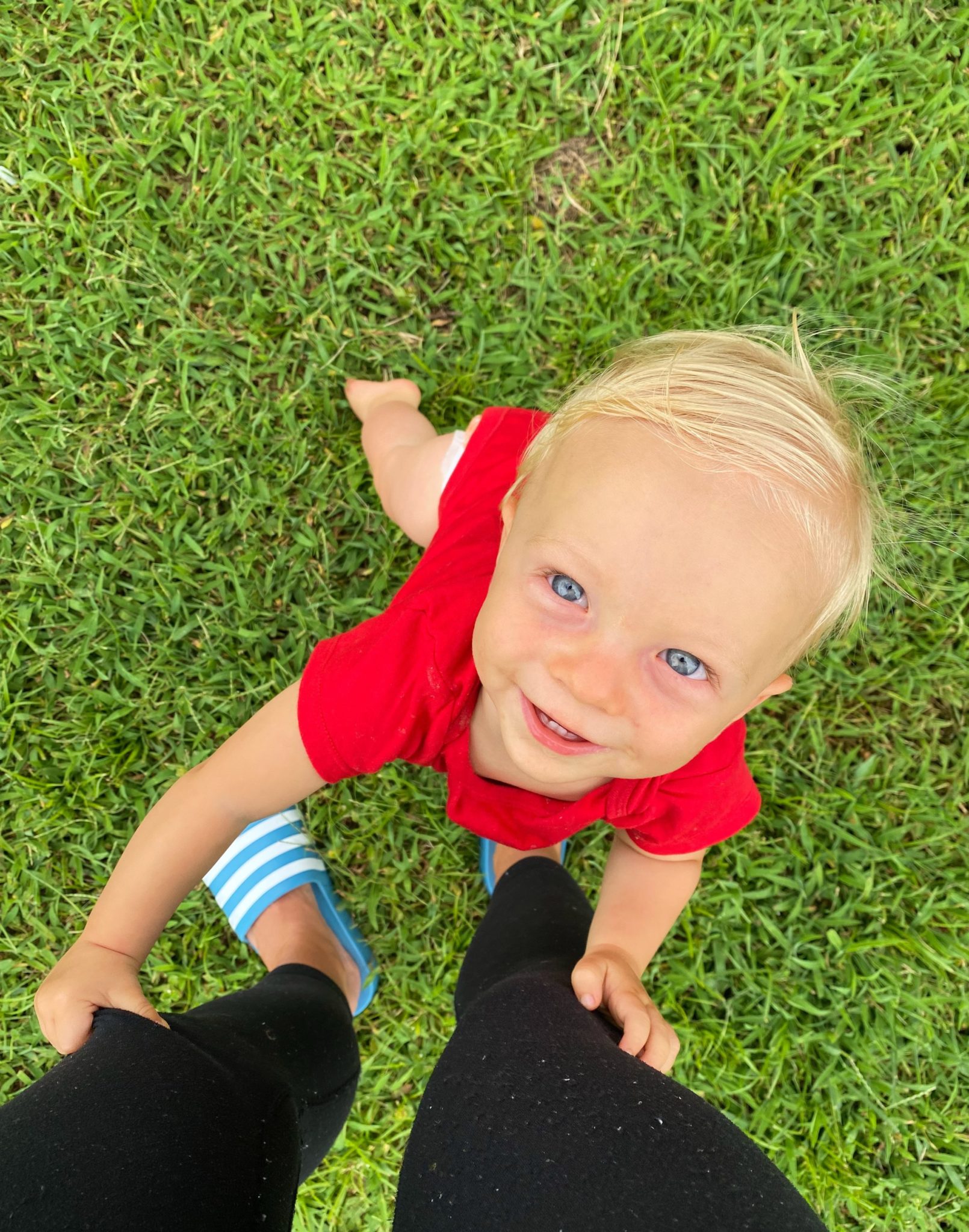 There are just so many memories and so much love pouring out of my heart when I think of the past year with our Rhetty Roo Roo. And yes, Rhetty Spaghetti and Rhetty Roo Roo are Rhett’s nicknames that all of us say non-stop every day. 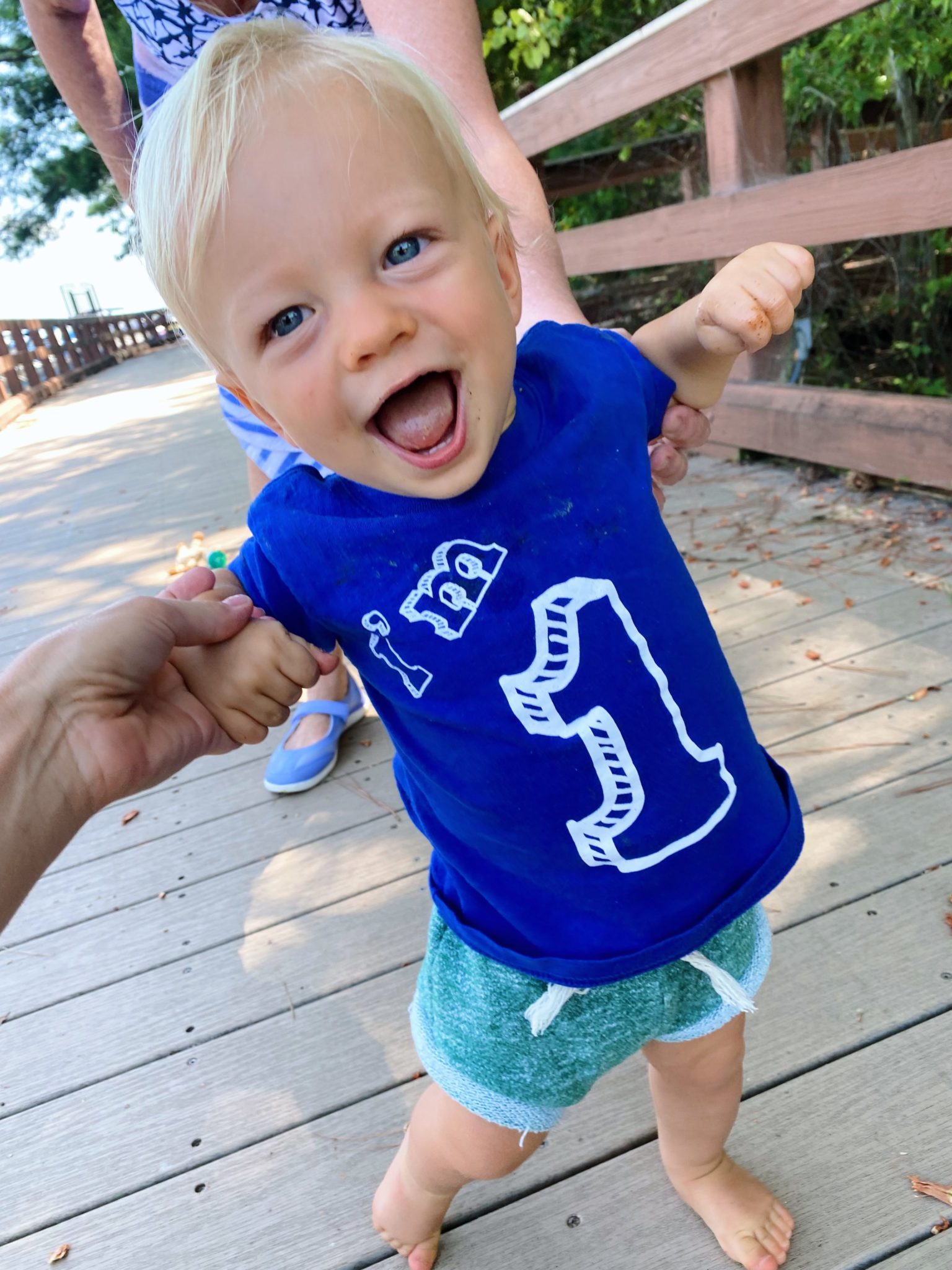 Even though I’m admittedly emotional thinking about our baby turning one, thankfully Rhett doesn’t let me hang out in hyper-emotional mom land for long before he catches my eye and breaks into a big, toothy grin (10 teeth!) that’s almost always followed by flailing arms and breathy belly laughs. Rhett is a huge source of sunshine in our house and melts my heart all day long through his giggles, growl-like babbling, his “mamamama” version of “mama” and his crazy climbing. We joke that Rhett isn’t a cuddly baby (he refuses to sit still) but he IS a cuddly climber and loves to be close to you by climbing all over your body. We’ve learned to interpret his face grabs and his desire to climb over our legs 100 times as his way of showing affection. Our sweet little monkey man. 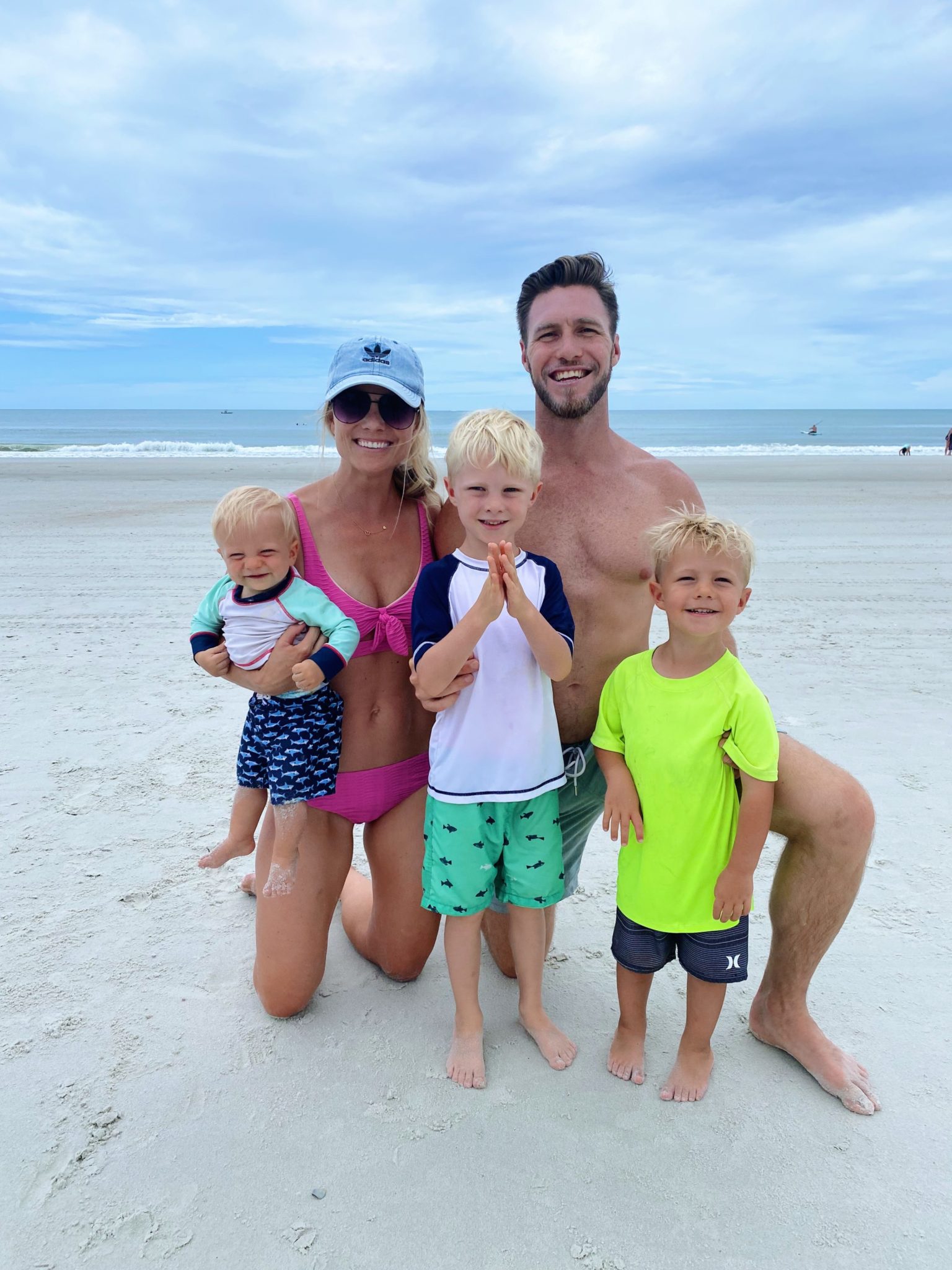 Rhett is happiest outside and thrives on activity. Exploring and crawling around in the grass or dirt is his happy place. He’s also a big-time water baby and thrives in the pool, ocean or lake. He’s fearless around the water which is slightly terrifying (and a large part of why we made sure we did ISR lessons with him) and he shocks us by continuing to crawl toward the ocean or lake even when waves come up onto the shore and smack him in the face. He’s not fazed at all and just wants to get into the deeper water! 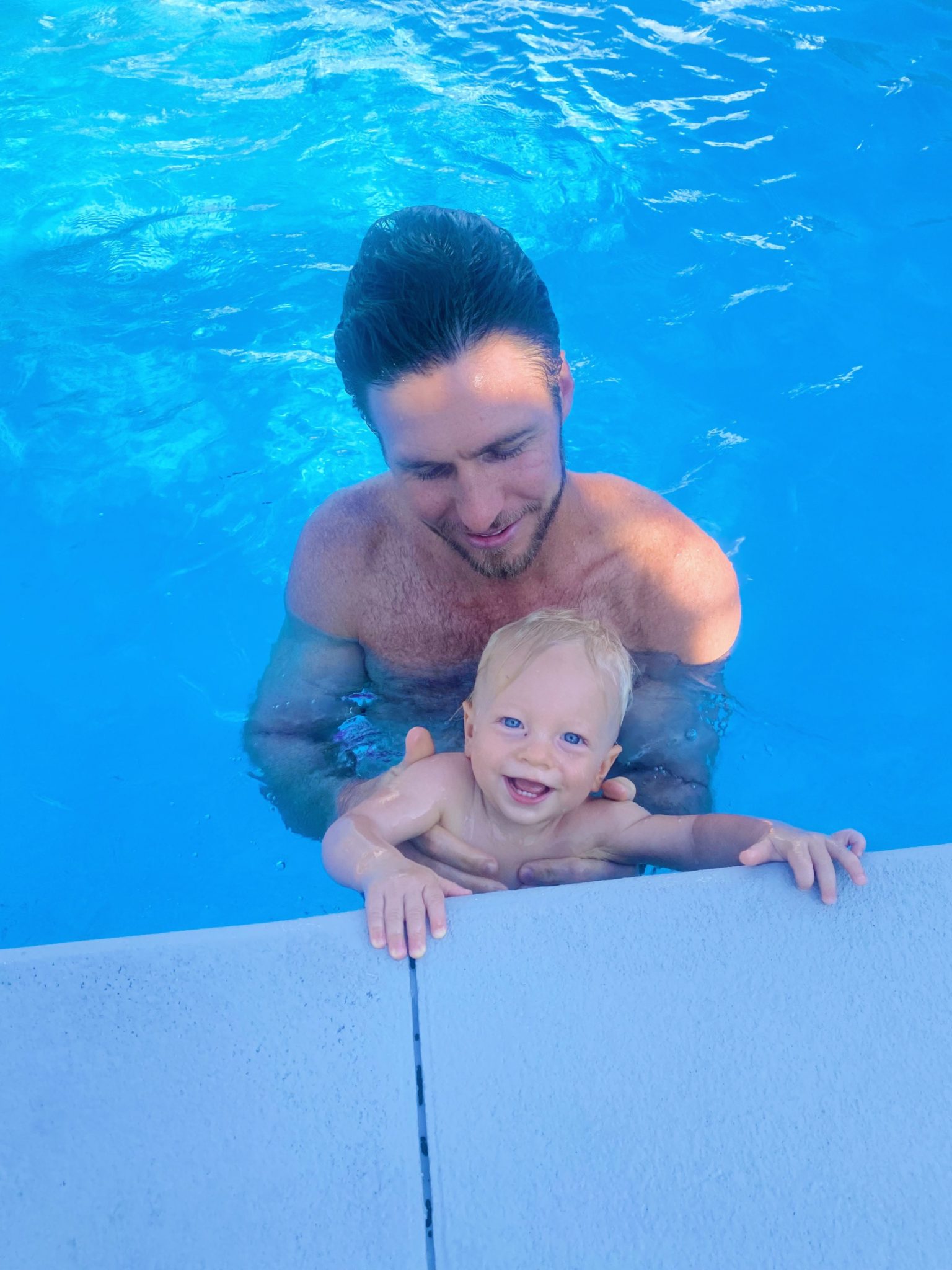 Watching Rhett figure out how to do new things and play with new toys around our house is always so entertaining. He’s a little sponge right now and seems to really enjoy it we sit on the floor with him and set up toys around him to play with together. Rhett is very physical and loves turning just about anything into a walker… including our bathroom trashcan. He’s still primarily crawling but has taken six steps in a row and will attempt a few steps here and there throughout the day. 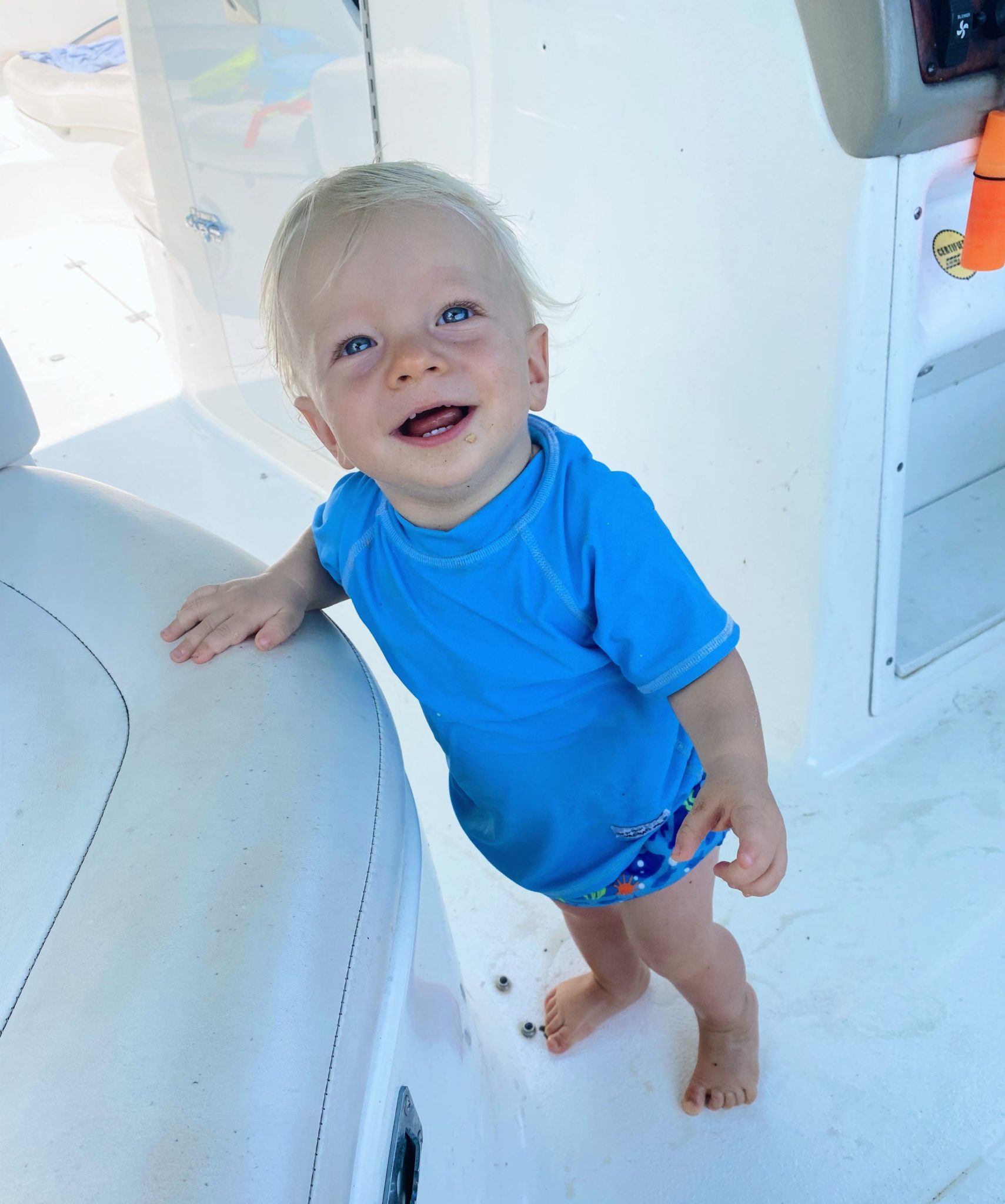 We’ve been diving head-first (sometimes literally) into solid food for a few months now and the fact that Rhett is an interested and explorative eater has me exhaling a big sigh of relief. Much like his oldest brother, Rhett is a tiny little guy but he really seems to LOVE food and eating which helps my stress levels around mealtimes a lot since that was definitely not our experience with Chase. Rhett gets excited when his food bowls come out and is almost always down to try just about anything we put in front of him. He has serious opinions and preferences though and just because he’ll try something definitely does not mean he will eat it. Rhett tends to do better with the food we eat (he clearly prefers seasonings, sauces and flavor!) and inhales bowls of cottage cheese and yogurt for breakfast like it’s his job. 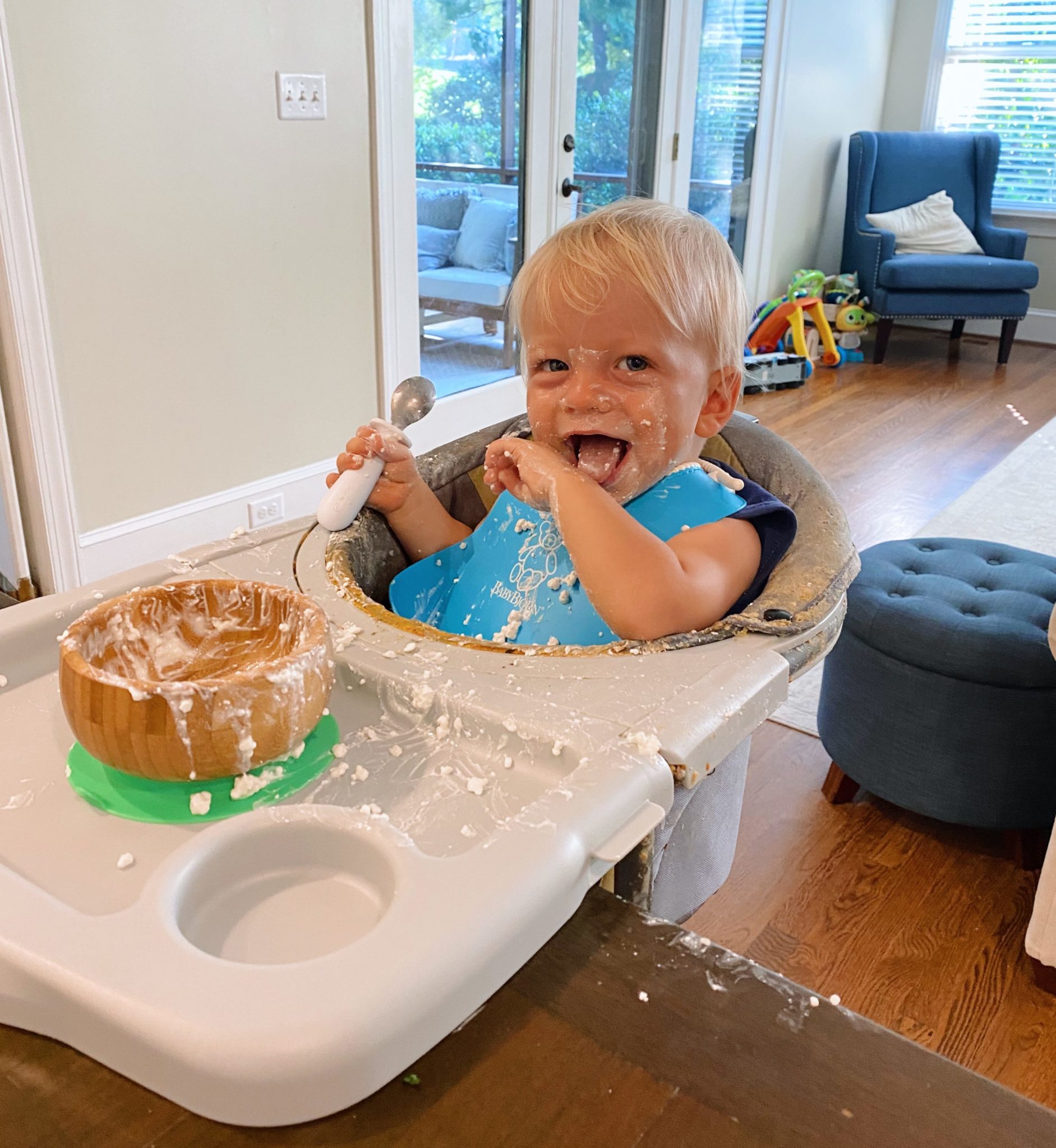 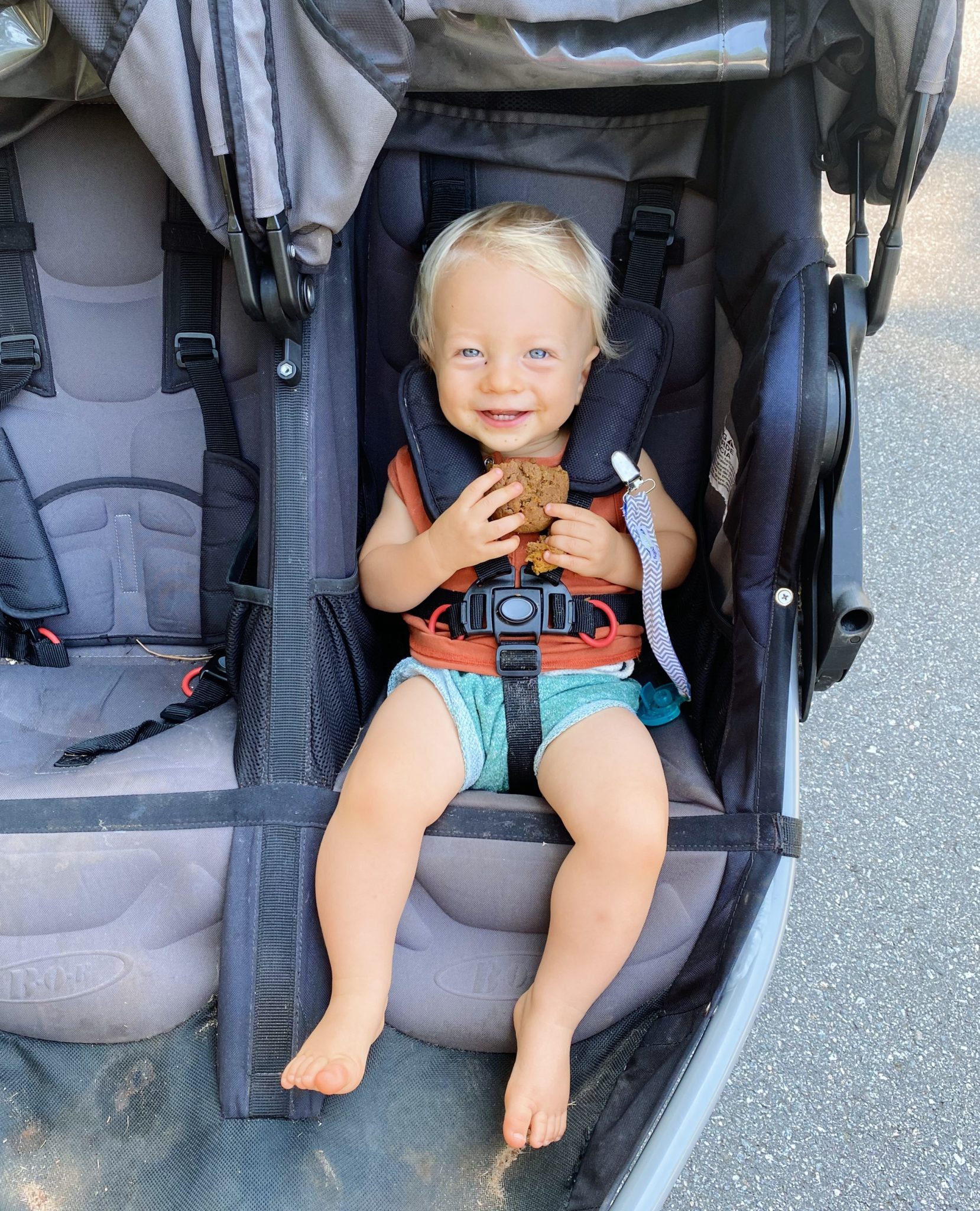 As far as nursing, we’re still going strong over here. Rhett is a distracted eater for sure and basically refuses to eat anywhere other than his room with the lights off and his noise machine on so all of our nursing sessions occur at home. This works well for us at this point since he’s not nursing a ton anymore. His best feeding is first thing in the morning and he’ll sometimes eat before or after a nap as well and then nurse again before bed. Basically I can count on two decent nursing sessions every day and occasionally a third one when he’s in the mood for more breastmilk. I don’t have plans to wean him at the moment and while I honestly think Rhett probably wouldn’t care if we stopped right now, I’m not in a rush and will look to wean when the time feels right for both of us.

For months we struggled hard with Rhett’s sleep — particularly getting him to nap for more than 30 minutes — but we are in a much better place now that he is one year old. I’ll never take decent baby sleep for granted and am relieved to share that Rhett sleeps through the night most nights and typically goes to bed at 7 p.m.  He usually wakes up around 7 a.m. but he’s been on a bit of an early wakeup streak for the past week or so and I’m crossing my fingers he’ll go back to sleeping in until closer to 7 a.m. soon. (He’s been teething hard and I think this may be the culprit.)

Rhett takes two naps a day though the timing of his naps vary greatly. It’s a lot harder to get a third child on a set schedule you can stick to since our commitments and school drop offs and pickups often conflict with ideal nap times but Rhett is pretty good at being a flexible napper. One of his two naps is usually a good one lasting a solid two hours and his second nap is usually closer to 90 minutes or so. He settles down for his naps easily and loves all of his Wubbanub pacifiers and his white noise machine.

Rhett has quite the little fan club in the form of his two older brothers. 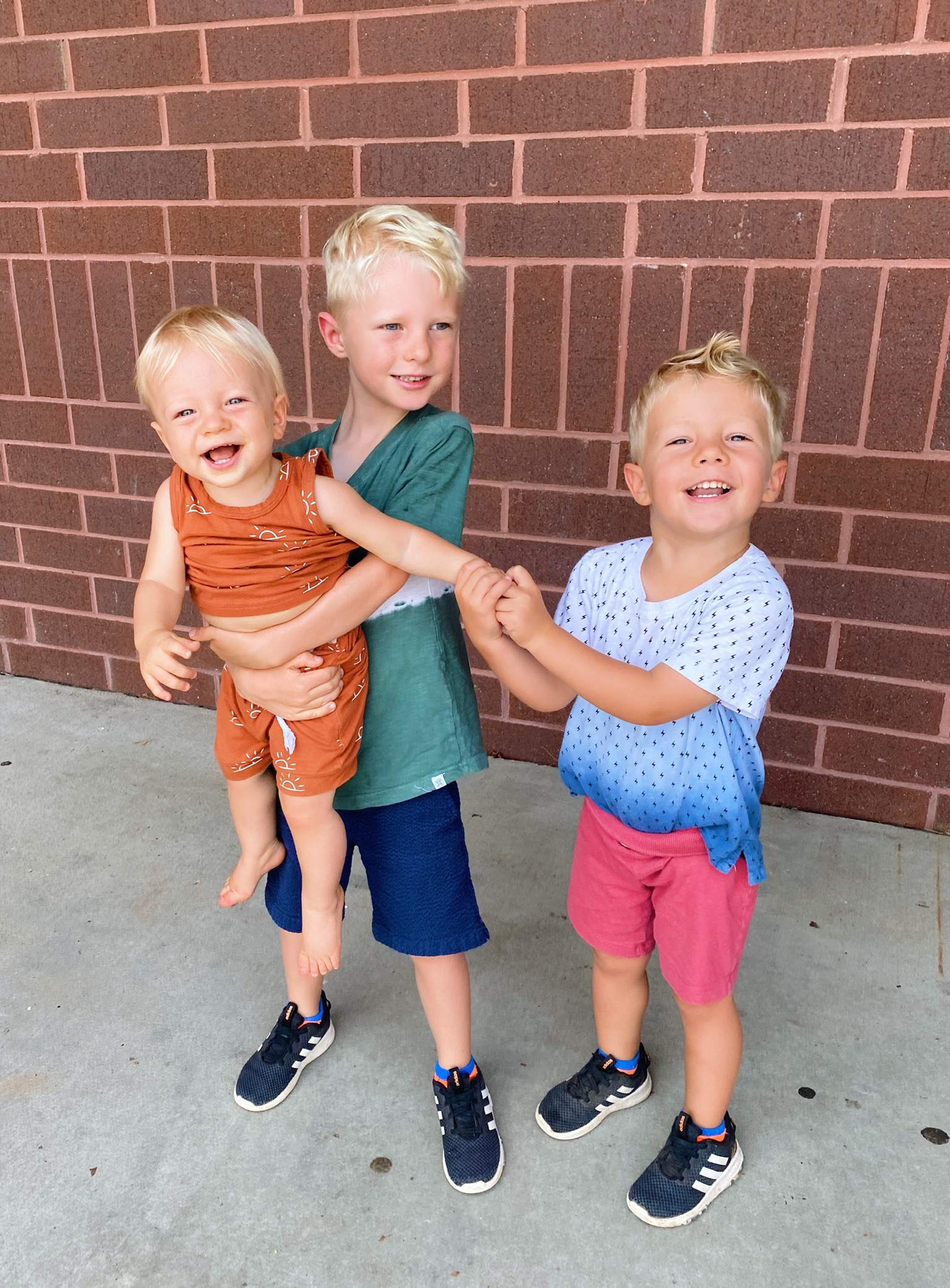 Chase and Ryder adore Rhett and always want to hold him, help him and teach him new things. Rhett is captivated by his big brothers and follows them all over the house. He seems to have the most serious case of FOMO I’ve ever witnessed and doesn’t want to be excluded from anything. 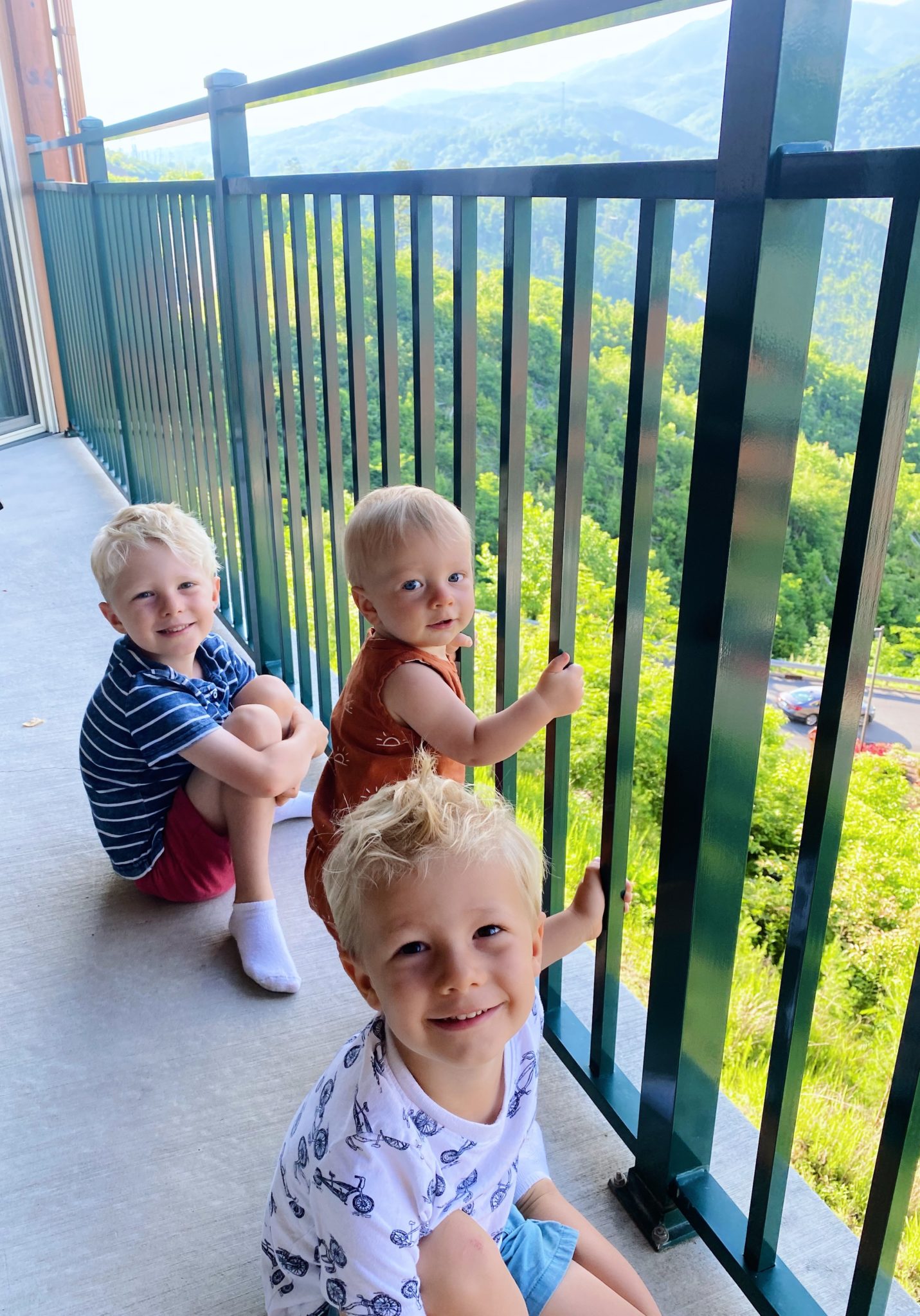 His crawl is crazy-fast and often motivated by his desire be hot on the heels of Chase and Ryder. He’s brave and full of energy and determination and wants nothing more than to be able to do everything his three- and six-year-old brothers do. One of the current struggles we’re facing is the fact that Rhett wants to be into everything. If Chase and Ryder start playing with something, Rhett wants in and while they’re good about including him when they can, if they’re building something or creating something on the floor, they can get frustrated with their baby wrecking ball of a little brother. They’re learning to build things up high and I think that’s only fueling Rhett’s desire to learn to walk and grow.

Rhett is learning how to show his preferences big time and Chase and Ryder are regularly learning how to interpret his wordless communication. A loud screech from Rhett is “NO!” or “Stop it!” — something Ryder and Chase maaay need a little help remembering from time to time. Chase and Ryder seem to love coming up with games or make believe scenarios involving Rhett and they crack him up and make him laugh harder than anything. No one cheers louder or is prouder of Rhett for achieving new milestones than his big brothers and watching our three musketeers together is truly one of my favorite things in the whole world. 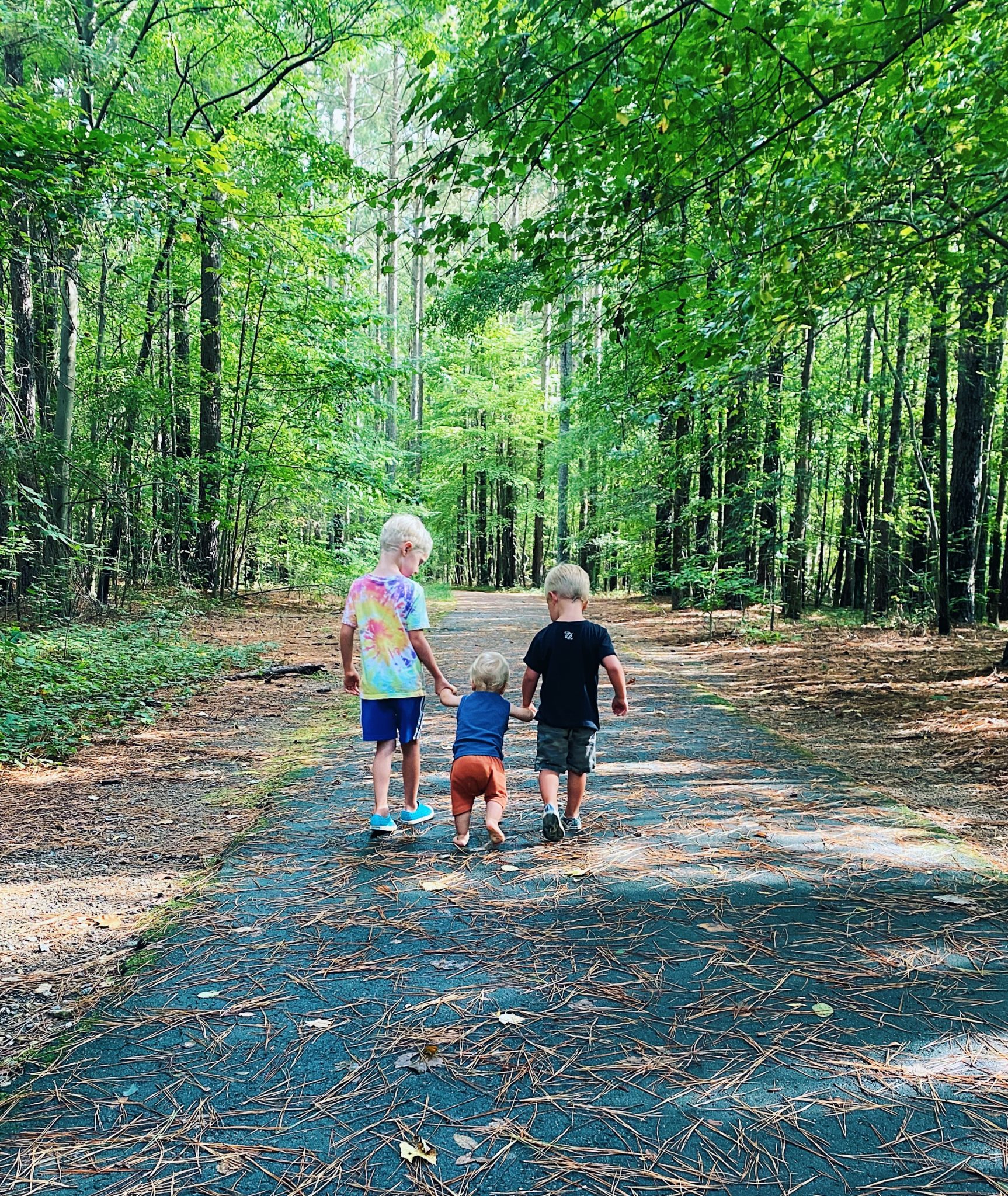 Also, overhearing them talk about Rhett to their friends and tell silly stories about their baby brother is just the sweetest. It’s clear their bond is deepening every day and I’m just thrilled to watch it continue to grow.

It’s been a blur of a year but a truly amazing year with our Rhett and we love him so, so much. 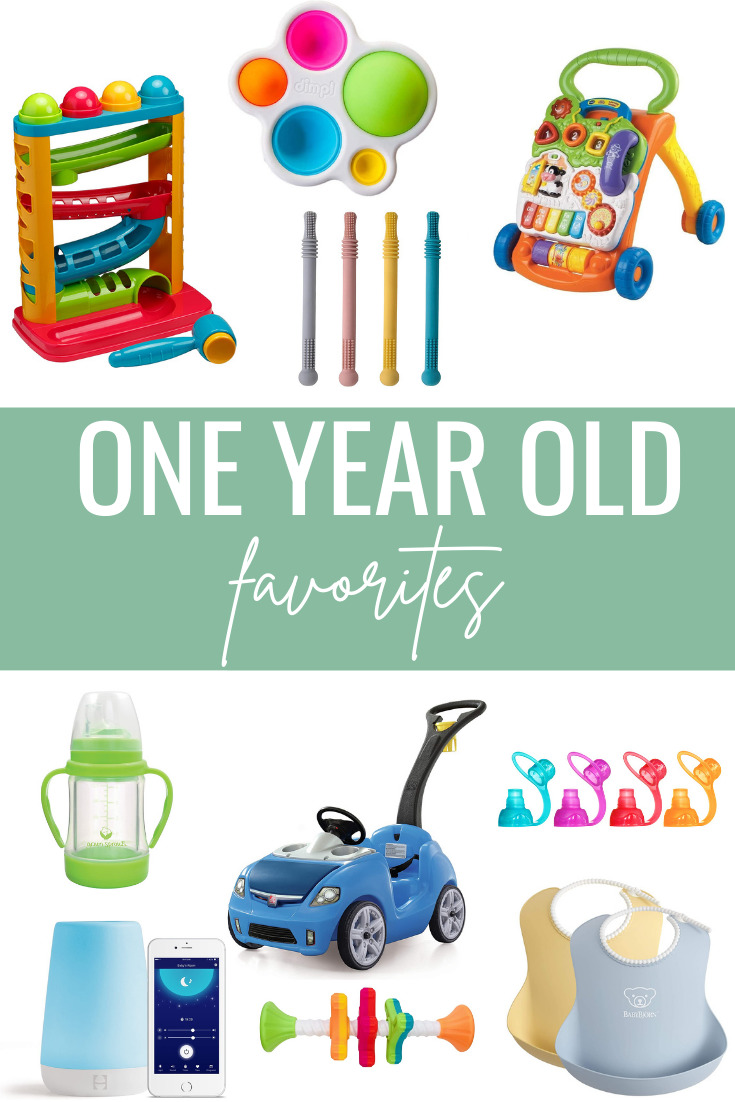 Almost every single thing on this list was something I saved for Rhett that his big brothers loved, too!

The post Rhett is One! appeared first on Peanut Butter Fingers.