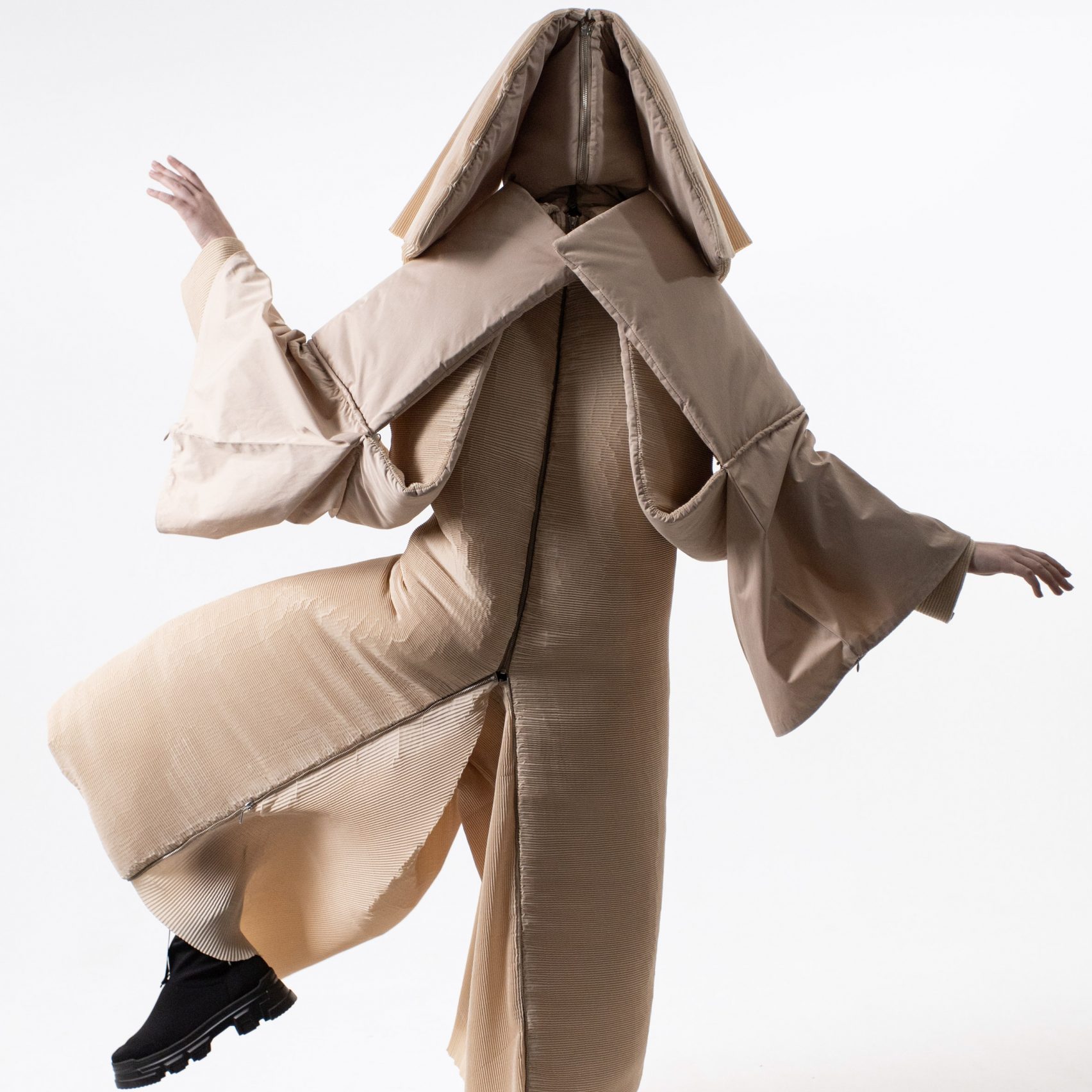 Ukrainian fashion house DZHUS has created a series of fashion pieces that can morph into different types of garments for its Autumn Winter 2022 collection, which features the brand's last designs before Russia's invasion of Ukraine.

Called Pseudo, the collection was originally unveiled at Ukrainian Fashion Week only weeks before the war broke out in February.

Psuedo includes a range of flexible clothes that have been designed to transform from one garment to another, such as a three-way piece that can become a hat, a bag or a top.

"I add extra functions to what used to be a simple thing," DZHUS founder Irina Dzhus, who previously shared how she fled to Warsaw in Poland to escape the conflict, told Dezeen.

"In the Pseudo collection, all the pieces are transformable, and I don't just mean detachable sleeves," she added.

"These are unified wardrobe items that each have completely different styling options, such as a bag that unfolds into a scarf, or a top wearable as a hat."

The concept for the collection was informed by the idea that "illusion" is at the centre of metamodernism culture, according to the brand.

Illusion is the name of one of the playful garments, a ribbed and padded vest that can be transformed into a functional handbag with a coat hanger for a handle.

The idea came to Dzhus while she was backstage at a fashion show observing model dressers walking around holding garments on hangers in their hands.

"I used hangers as bag handles, which creates a lovely effect when the viewer is, at first, a bit confused, wondering if it is actually part of the accessory, and then enjoys its originality and functionality," explained Dzhus.

"There is room for humour in our designs."

Shifter is a two-way transforming white cotton piece that can either become a minimal midi-length dress or a long, statement shirt.

The garment takes cues from origami, as it is shaped using a single piece of fabric with a structured collar and a geometrically folded back.

"By saturating one object with options for transformation, not only do we prolong its life but also excite the wearer's imagination and encourage them to use a garment as a key to self-expression," said Dzhus.

Another piece in the collection is Duality, a double-faced melange cotton piece that can transform 10 ways to create a jumpsuit and a vest as well as a coat, a dress and multiple types of bags.

Divided in half, the garment features extended zips that can become bag handles and an adjustable strip of fabric that can fasten the clothing behind the neck to create a statement collar.

"I feel that multi-purpose products are a conscious alternative for the fashion of tomorrow," suggested Dzhus, who said that all of the pieces were made using "only cruelty-free materials".

"I must also mention how convenient multifunctional pieces are for fashionable travellers," she said.

"This was proven by a less positive experience of mine – I swear I was wearing the same transformer trousers hiding from bombing in a basement (sitting on dusty concrete with all my savings in the pockets) and to a DZHUS pop-up in Paris soon after my evacuation." 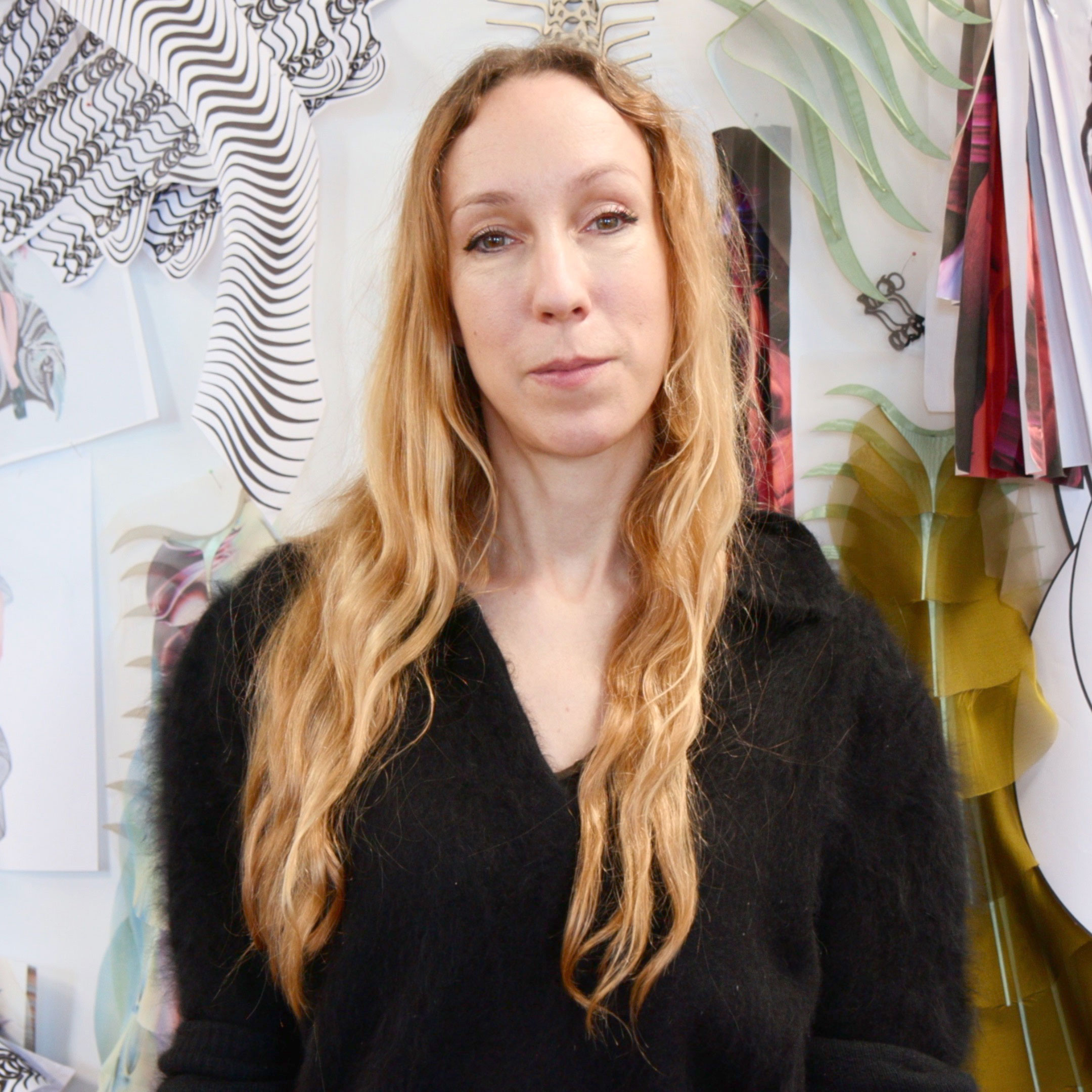 The designer explained that she chose distinctly textured fabrics for all of the garments in the collection, which also feature various configurations of pleats.

Dzhus also experimented with different densities of insulation for the clothes in order to create an array of volumes and shapes.

"I really like the architectonic and somehow otherworldly silhouettes we have achieved," she said.

Almost six months since the war began, Dzhus reflected on her feelings towards the last collection her brand completed before Russia invaded Ukraine.

"The war has changed all of us forever and now I look at my own creations from a different angle," she said. "I've been discovering hidden meanings behind the collection. I can see duality and a spectrum of illusions in each of my designs."

"Psuedo's concept was initially a reference to the metamodernism culture, with its irony about the surrounding world, but eventually, it mutated into a story of the fragility of existence," she added.

"Whatever you think you know can show its opposite side, and whatever you expect from your subjective reality means nothing in the face of universal chaos."

Displayed above, a video lookbook for the collection created by Dzhus and her team was shortlisted for the Berlin Commercial Festival. The designer herself is seen transforming the garments worn by models.

DZHUS has created various other architecturally precise clothes, including a past collection with silhouettes informed by tectonic plates and Nihilism – another set of garments that can be folded into different shapes.

The photography is by Alexy Ponomarev.